Are you panicking over testing season coming up yet?

I always found that right after Winter Break I realized how close testing time really was and I became a drill sergeant.

While testing is not always fun or interactive, I do believe that practicing on a regular basis up until the week of testing makes the actual test not such a big deal.

If we have practiced weekly, then I am fully confident in telling the students, “It is just a regular day.  You have done this a million times before and you know what to do.” 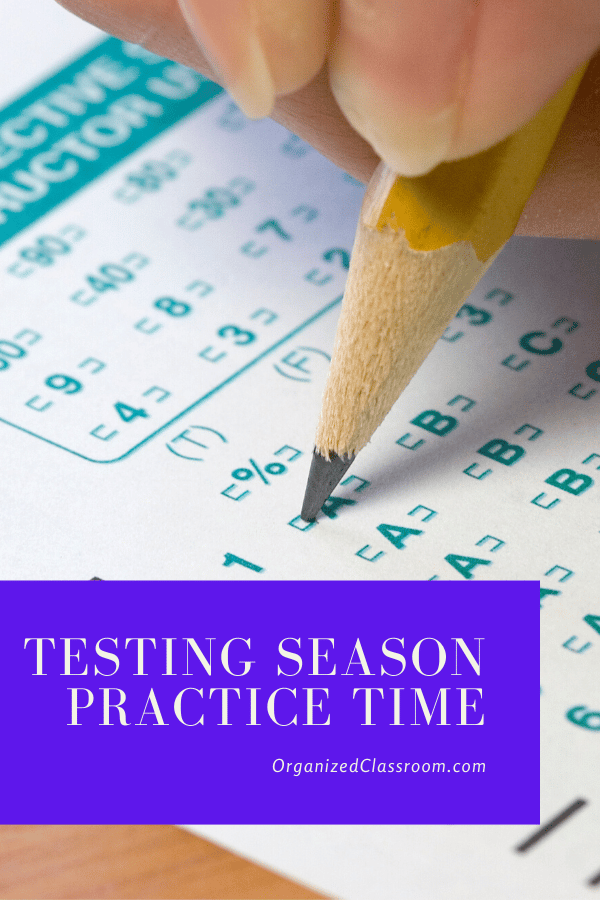 One way I prepare students is with a weekly practice test that is timed.

Because my desks are in groups of four, I want to resist the urge to sneak a peak at his or her neighbor’s paper.

I wanted an easy way to create some privacy without having to get out bulky cardboard to set up and take down each time.

Instead, I used 2 colored folders to create “offices.” I buy the same colored folders at the beginning of the school year in bulk when they are a penny each.  I probably have an extra 500 folders always on hand. 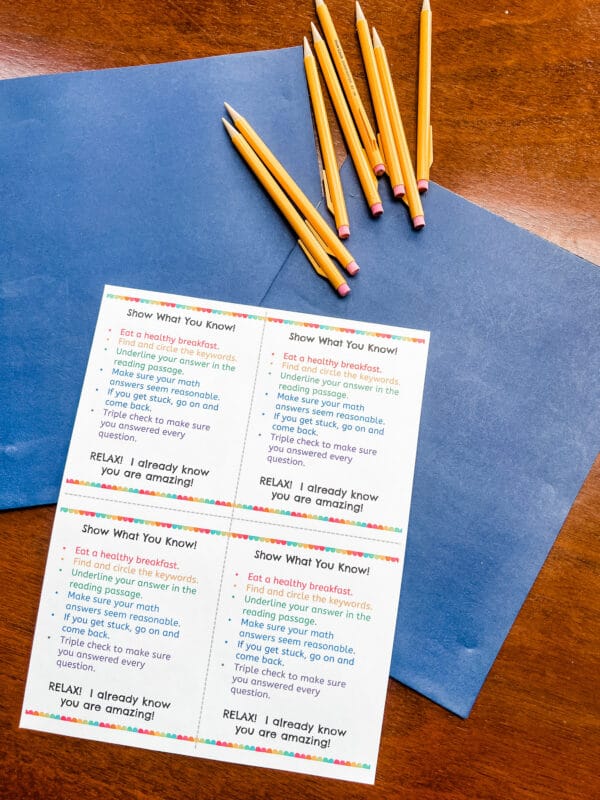 The folders are easy enough to place into their desks and pull out when requested.

They put them up and have a private area to work.

It also minimizes the urge for those that speed through their test and then look around to see if they are the first done.  It is much harder to look through the folders without being caught. 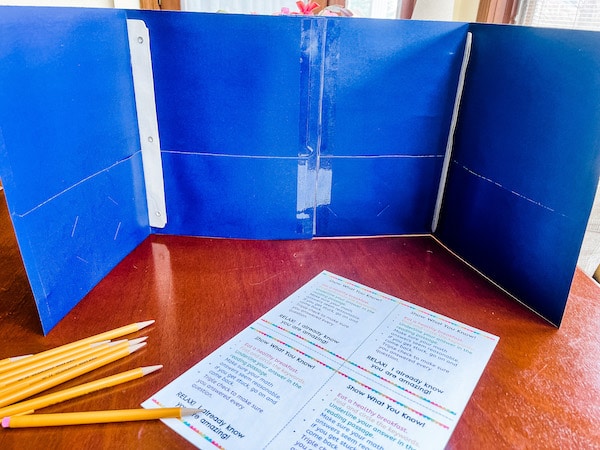 If you start to have issues with students who are playing with their pencils through the crack in the folders, another option is to take some clear tape down the middle of 2 folders.  They will lay flat and still be able to fit in a desk nicely as well. 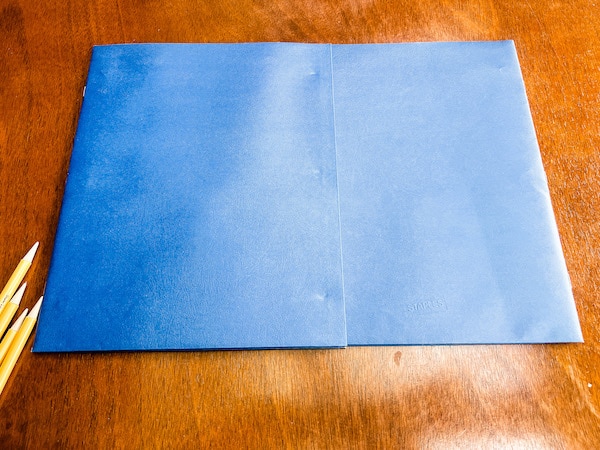 Students are not allowed to color, write their names, or personalize the folders for a reason.

I want them to look uniform and be as little of a distraction as possible.

Plus, they can be used from year to year!

I know some teachers will laminate the folders which make them even more sturdy, but I always worry about the students who like to pick and peel away at the lamination, which proves to be a different distraction.

File folders can also be used, but I do find that the basic 2 pocket folders are cheaper and easier to replace.

There are definitely several options above, so use what you like the best for your preferences and students.

One other super handy tip: Print off some “test tip reminders” on sticker paper and place it on the inside cover of one of the office folders. 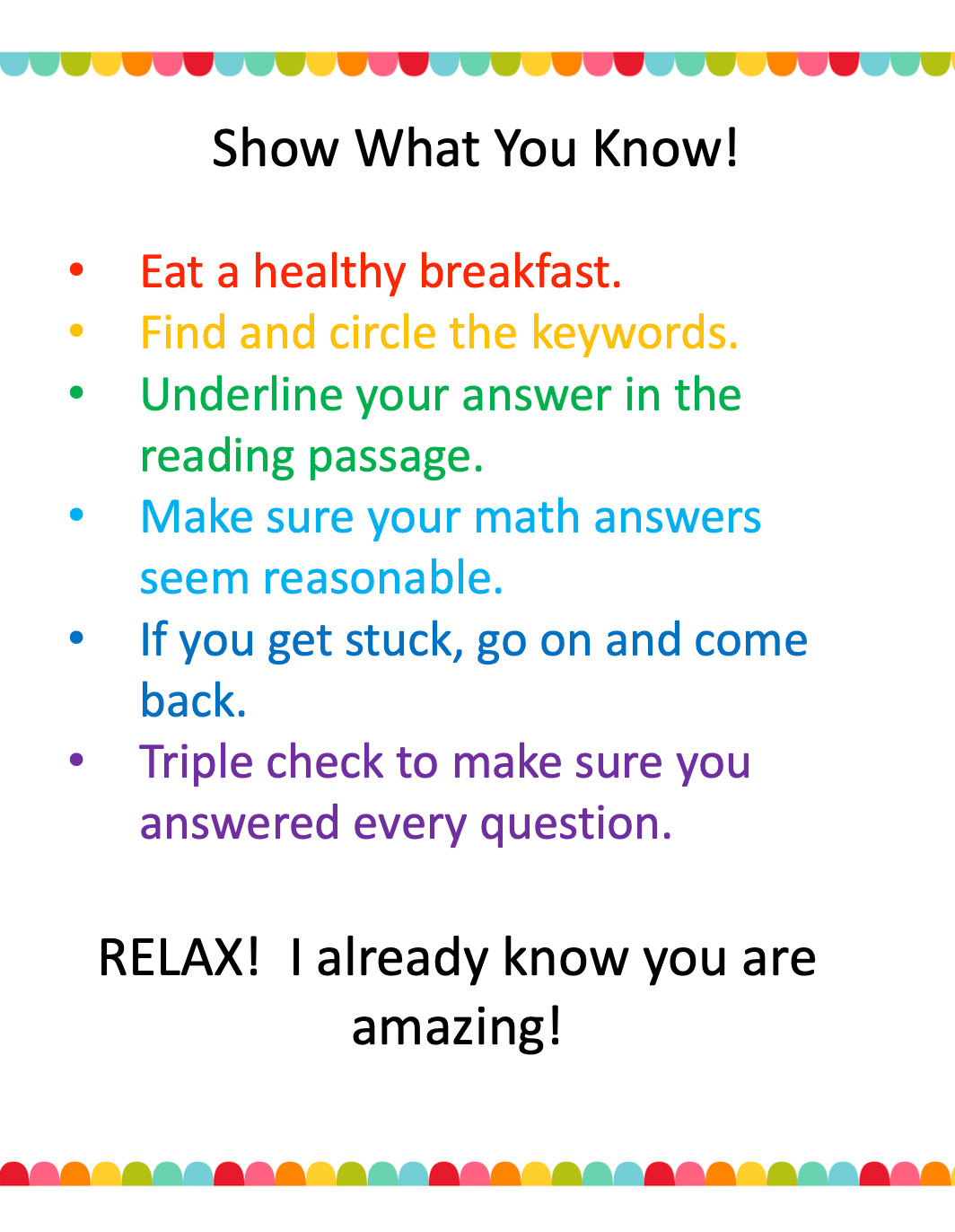 This of course won’t be allowed during the actual state testing day, but it will be used so many times throughout the school year up to that point, that students will hopefully have the tips and words memorized by then. 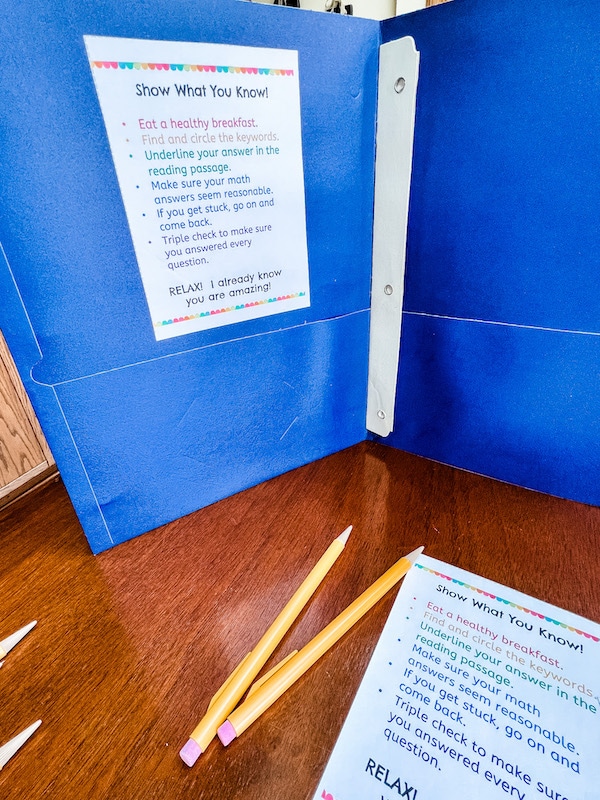 Want a copy of my testing tips?

They come 4 to a page and I print them on Avery 8165 full sheet label paper and then cut them apart on the lines.

Grab your copy below. 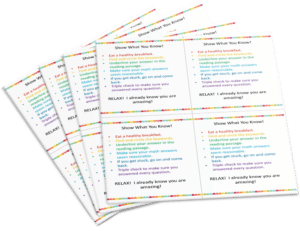 How do you prepare for standardized testing season?

Do you pull desks apart?  Do the students turn in different directions – or something else?  I would love to see your tips as well in the comments below.

A teacher, mom, wife. Featured in Scholastic Instructor Magazine, NEA, TeachHub, and Edutopia, Charity has over a half million fans and followers all over the world. A former K-6 gifted intervention specialist, she has built and managed over 20 educational related websites since 2011, and collaborated with high profile companies, such as eBay, ASCD, and Pinterest. Charity is the CEO of PEN Group Online, Inc. where she has taught her classroom and teacherpreneur business development systems to thousands of fans and members.