You are here: Home / All Freebies / Happy Groundhog day!
Groundhog Day is a holiday celebrated in United States and Canada on February 2.
In weather lore, if a groundhog, also known as a woodchuck, or marmot emerges from its burrow on this day and fails to see its shadow because the weather is cloudy, winter will soon end.

Discuss with students that an old legend says that the groundhog wakes up from his long winter nap and goes outside, if he sees his shadow he runs back inside his hole or burrow to sleep, indicating that there will be six more weeks of winter.  If does not see his shadow he stays outside to play which means that spring will soon arrive.  The groundhog pop out on February 2.
I made these worksheets to learn bit more about Punxsutawney Phil (and his relatives 🙂 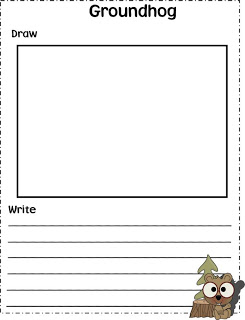