You are here: Home / All Freebies / Building Number Sense 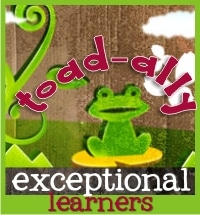 This is Alison Whiteley from Toad-ally Exceptional Learners with a Number Sense Freebie for small groups.

WHAT IS NUMBER SENSE?
Number sense involves understanding numbers; knowing how to write and represent numbers in different ways; recognizing the quantity represented by numerals and other number forms; and discovering how a number relates to another number or group of numbers. Number sense develops gradually and varies as a result of exploring numbers, visualizing them in a variety of contexts, and relating to them in different ways.

In the primary and intermediate grades, number sense includes skills such as counting; representing numbers with manipulatives and models; understanding place value in the context of our base 10 number system; writing and recognizing numbers in different forms such as expanded, word, and standard; and expressing a number different ways—5 is “4 + 1” as well as “7 – 2,” and 100 is 10 tens as well as 1 hundred. Number sense also includes the ability to compare and order numbers—whole numbers, fractions, decimals, and integers—and the ability to identify a number by an attribute—such as odd or even, prime or composite-or as a multiple or factor of another number. As students work with numbers, they gradually develop flexibility in thinking about numbers, which is a distinguishing characteristic of number sense.

WHY IS IT IMPORTANT?

Number sense enables students to understand and express quantities in their world. For example, whole numbers describe the number of students in a class or the number of days until a special event. Decimal quantities relate to money or metric measures, fractional amounts describing ingredient measures or time increments, negative quantities conveying temperatures below zero or depths below sea level, or percent amounts describing test scores or sale prices. Number sense is also the basis for understanding any mathematical operation and being able to estimate and make a meaningful interpretation of its result.

HOW CAN YOU MAKE IT HAPPEN?

When students trade with place-value blocks they can demonstrate that the number 14 may be represented as 14 ones or as 1 ten and 4 ones. They can also demonstrate that 10 hundreds is the same as 1 thousand. By recording the number of each kind of block in the corresponding column (thousands, hundreds, tens, or ones) on a place-value chart, students practice writing numbers in standard form.

My favorite way is to play games during guided math small groups. The games below, my students love playing. They are print and go–toss in some dice and your good to go! These games build number sense by having them work with Base Ten, Number Identification, and Subitizing.

Be use to follow me at my blog Toad-ally Exceptional Learners and my Teachers pay Teachers for more freebies.