You are here: Home / 6-8 / Why are Students Susceptible to Social Pressure? 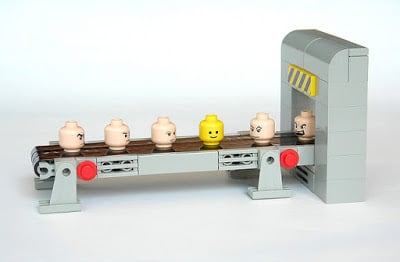 We have always known that people conform to their social group / current culture. We’ve never really known the reason why. We strongly suspect that people fear:

In the 1950s a psychologist named Solomon Asch, conducted a series of psychological experiments on conformity. “The experiments revealed the degree to which a person’s own opinions are influenced by those of groups. Asch found people were willing to ignore reality and give an incorrect answer in order to conform to the rest of the group.”*   The experiment couldn’t explain what was going on in the minds of the conformists.

In 2005 Gregory Berns (an Emory University neuroscientist) updated this experiment with the help of brain-scanning technology.   An fMRI scanner took snapshots of the volunteers’ brains as they either conformed or broke with groups opinions. He discovered why people conform to the group by visualizing the effected part of the brains’ activity.

So what does this have to do with social fear? There were people in the Asch and Berns studies who didn’t conform. Using logic, they picked the correct answer in spite of group pressure. Berns calls this “the pain of independence” because the activated area of the brain was in the amygdala which is associated with upsetting emotions such as the fear of rejection.

So what does this information have to do with teaching health and engaging our students? People of all ages need to look inside of themselves and decide

These studies have significance in regard to your student’s goals, their self-image, their ability to say NO, and their decision making ability because we / they live according to the value system conveyed to them by media and authority figures. When I was young, I believed what the world told me; those values were different than my parent’s values. The tendency is to follow the NEW without understanding / appreciating the value of the old.

The wise and learned college students of my day believed, marched and yelled “You can’t trust anyone over 30”.  Those over 30 years included their parents, grandparents, aunts/uncles who lived through a depression from 1929 to 1941. They fought / sacrificed through WW2 (many of us did not know that America fought / defeated two evil empires who wanted to dominate the world.  Our high school American history classes didn’t have time to cover the depression, World War 2, or the Korean War.)   My parent’s generation came home from war, where they saw a lot of death and destruction;  and their greatest desire was to build.  They built families with children (a celebration of life), they built American industry and rebuilt a devastated Europe and Asia. Appreciation is based on age and experience. My generation only experienced plenty, peace and opportunity until Vietnam and the rebellion began.

Today’s generation is repeating history. They are looking at their parents and seeing them as outdated. They have little appreciation for why their parents’ generation is the way they are. Without life experience it is difficult to recognize values from the past. I know that looking back I see much more value in what was accomplished in the rebuilding time. Without all those accomplishments, my generation would not have so much that we are taking advantage of today. Without traveling abroad, it is very difficult to understand that most people in the world do not have the opportunities or advantages that we live with every day.

For our students to accomplish their hopes and dreams, it is important:

Or they may follow where the currant culture leads them. Following the group / culture has little to do with social pressure. It has everything to do with follow the leader.  It’s important our students know who leads them socially and culturally.  (Eric Hoffer said — “When people are free to do as they please, they usually imitate each other” (or blindly follow).

﻿
Here is an example of social pressure you didn’t see coming. Did you know that our language reflects value?   Currently, purity is a big selling point. Go to the grocery store and you will find fruits, veggies, meats with no additives, for healthy eating we are encouraged to eat whole foods instead of processed foods, and organic foods are supposed to be better for you. Purity of the food we eat has great value. In China, there is a huge and growing market for supplements and vitamins from the U.S. because the U.S. Food & Drug Administration requires manufactures to test products for their purity. We pay more for authentic 100% real virgin olive oil because it is pure, that is, not cut with cheaper oils. For some reason brides still prefer white dresses and First Communion dresses are white. White suggests purity. The expression pure in heart generally means clean, blameless, unstained from guilt, or innocent. There is a purity movement in language with everything except human beings. When was someone described admiringly as a virgin / chaste? There was a time when physical purity was an absolute. The phrase “losing one’s virginity” now has a ring of a heavy duty ordeal, something to get rid of. We get rid of things we don’t value. How is virginity portrayed on TV movies?   Do you remember this news item?
To promote thinking and hopefully a discussion offer this question with your high school students:

Our language and some social settings reflect the value of words such as pure, purity, chaste.

I (the adult in the room) detect conformity of thought or if you will, a consistent narrative promoted in the media. It is the new normal for ME to accept. What do you, your students, see?

What happens if you disagree?

From the Asch and Burns’ conformity experiments, we know in groups people shift their perceptions. The media (music, TV, movies) has a big audience. Discuss with your students — Ideas / behaviors currently in the media (viewed on TV shows in movies, or music videos) that did not exist during their parents’ teenage or young adult years. In other words, your student’s parents may not like the content and maybe your students, like me so many years ago, are rolling their eyes because of their parent’s lameness.

(Teacher Note: sexual scenes now shown on TV today didn’t exist 5 / 10 / 15 years ago. We now see sympathetic portrayals of every lifestyle. It is a purposeful narrative of unquestioned acceptance. This lifestyle is normal just like. . . .  For example, last TV season on the program How to Get Away with Murder, I saw what I considered an explicit aggressive sexual scene between two men.   Through the years, we have been conditioned to see sympathetic gay characters on many TV programs. I never expected to see two men going hard at it. I don’t know why I was surprised, how long have we viewed this kind of action between a man and woman. Long enough to consider it normal?)