You are here: Home / All Freebies / Develop Language Skills with Barrier Games
Over the course of my speech-language therapy career I have used barrier games a lot.  I came across my first intervention guide to using barrier games a few decades ago, which contained geometric shapes of different sizes and colors.  That quickly became boring.
Part of the problem was that the intent of barrier games is two-fold:  on one side of the barrier a student needs to learn to listen carefully to the descriptions and directions, process what he’s heard, and follow the directions to create a scene identical to the one the speaker is describing.
On the other side of the screen, the student needs to provide concise descriptions and directions using robust vocabulary so that the listener understands what he is to do to create the scene.
The vocabulary of colors, shapes, and sizes was finite.  There needed to be more variety and richness to the activity.  I added rubber stamps and stickers to my intervention bag.  Rubber stamps were fun and could be used over and over again; unlike the stickers, which had a single use only.  I started using Clingforms and Unisets – those plastic pictures that could be moved and repositioned.  I had sets that represented grocery stores, zoos and aquariums, a family home, and more.

Now I create my own barrier games.  I still love the way that students get loads of real practice with giving and following directions, using and understanding descriptive vocabulary, and processing multiple critical elements.
Here is a free barrier game set for you to use.  If you haven’t tried them before, I think you’ll like both the way they work on skills, and the way your students have fun.
Keep on talking! 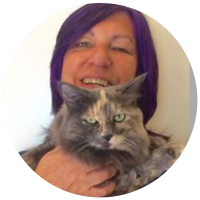 I have been a SLP for more than 40 years, working in public and nonpublic schools, nonprofit agencies, group homes and day programs, developmental centers. For the past 20 years I have run my own private practice, providing independent AAC evaluations, consultation, and staff training. I have presented full and part-day seminars and workshops, spoken at national and international conferences, and published research in peer-reviewed professional journals. I currently create AAC implementation materials on TPT.

« First Day of School Procedure Task Cards
Time to Get Those Math Brains in Gear! »