I saw this great Goal Getter display by Lessons with Laughter and knew that I had to recreate it. It was inspired by her trip to the Ron Clark Academy which I am dying to get to go to!! At least this way I could bring a little bit of RCA to me.  Might I add that our superintendent even stopped to read them- that’s how much of an impression they made!

These only took us one day to make – I did the typing but honestly this would make a great computer project – just adding shapes, changing fonts, glow effects – all activities the kids would like to do and can do. Goal setting for students is easy with the digital download below!

I showed them one I made as an example then told them the requirements – I just put it on the board:

Don’t make fun of mine – if I wouldn’t get in such a darn hurry I’d look better. I was a hot mess this day.  Plus I need to be accountable too!

We just Googled quotes about our word.  Like “hardworking quotes” “quotes about dreams” etc… it worked well for us.  I only have 2 ipads and 2 computers so I can monitor a small group at a time to look at quotes.  We picked ones that spoke to their hearts – since this is language they are familiar with and they did such a FANTASTIC job!! I was so impressed!

After all the writing I just uploaded into Powerpoint.  Put the goal on the black shape, added the one word, and the goal – then just played with fonts.

Be sure to scroll down to get your EDITABLE copy – easy to add text boxes on! Goal setting for students is easy with the printable! Print on colored paper or to it digitally and back with colored paper for a fun and EASY goal getting bulletin board display.

I cannot believe how well they turned out – I plan on having them reflect on their goals before the next conference as a piece to bring up with parents.  I already added this to my plans for next year – that is how much I love it!  Hoping to do one a quarter next year or at least a couple and have them as a keepsake.

I know many schools are focused on goals and I didn’t make them pick a school goal since I want them to think about anything in their life they want to work for but you could certainly make it an academic goal.

What do you do for goals in your classroom?!

Freebie can be found here – as this post originally appeared on SSSTeaching. 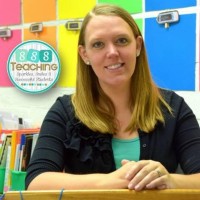 I'm Amber a former elementary school teacher and creator of resources K-5 (mostly ELA and Science). I have a passion for creating engaging and creative ways to reach students but especially with LAUGHTER!

I also encourage and support happy classrooms and schools through the Happy Teacher Happy Classroom movement! Supporting school staff through kindness is something I aspire to do!

Check out my blog - SSSTeaching (for more info!)